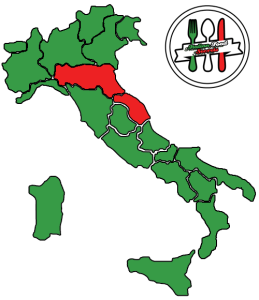 The cheese pit Sogliano at Rubicon joined the official list of typical Italian products with the certification PDO (protected designation of origin) that was issued on 3 December 2009.
Being a product PDO certification requires that the entire production process must be carried out in the regions of Emilia Romagna and Marche.
The Fossa cheese PDO is the gastronomic symbol of Sogliano the Rubicon.
The process required to achieve this is long and laborious. The cheese base, partially cured, must come exclusively from sheep’s milk, cow’s or mixed high quality, from farms of the hilly and mountainous Marche and Romagna. The forms are laid in ancient pits flask-shaped, carved into the sandstone rock to a depth of about three meters. This tradition was born in the Middle Ages: the farmers Sogliano, in the late spring, they were in the country to entrust their cheeses to infossatori, so they retained during the summer and protected them from the ravages of war; in November, returning then to withdraw the forms and, thus, could cope with the constraints of the winter.
There are four production stages: preparation, infossatura, seasoning and sfossatura. The preparation of the pit is to burn straw inside, to remove accumulated moisture; thus it has a kind of sterilization against germs which may be harmful to a normal fermentation. It then passes to the coating of the walls to isolate the tuff, with a layer of about ten centimeters of straw supported by a framework of vertical rods, tied horizontally by circles of wood; at the bottom are placed wooden planks. At this point follow the infossatura cheese, closed in bags of cloth (preferably white) on which the owners of the pits had previously affixed two numbers: the first corresponding to the owner, according to the weight (traditionally expressed in pounds). The bags are stacked up to the mouth of the pit, which is then filled and covered with cloth acts to avoid to the maximum perspiration; is closed by the application of a wooden lid sealed with plaster. Normally only made two hollows year, a spring and a summer.
Once sealed the cover, the curing begins, which takes place in particular conditions of temperature and humidity. The seasoning gives the cheese a strong taste and an intense aroma, gives a higher digestibility and better nutritional characteristics. Also causes a loss of serum and fat, and by the compression due to the weight to lose much of their cheese round. Has a duration of about 90 days. Upon expiry of this period will be used to sfossatura, that is to remove the materials which cover the pit and withdraw from the bags of cheese. Once completed operations sfossatura, ditches must observe a rest period of three months. The opening of the traditional was held on 25 November.
In this period, in the last two Sundays in November and the first Sunday in December, takes place the characteristic Fair Fossa cheese PDO, which annually attracts thousands of visitors.
The flavor of the aged cheese, rich hints of herbs, goes well with the sweet honey, figs caramel or jam; Also pleasing is the combination with the traditional balsamic vinegar of Modena. It is used in the preparation of pasta dishes, such as Cappelletti, passatelli and dumplings; grated or flaked become a great seasoning for dishes such as carpaccio and rib of beef. The most suitable wines to accompany him are the finest full-bodied red, like a good Sangiovese, or dessert wines. It is preserved in the refrigerator for several weeks, wrapped in a cloth, in turn closed in a paper bag. 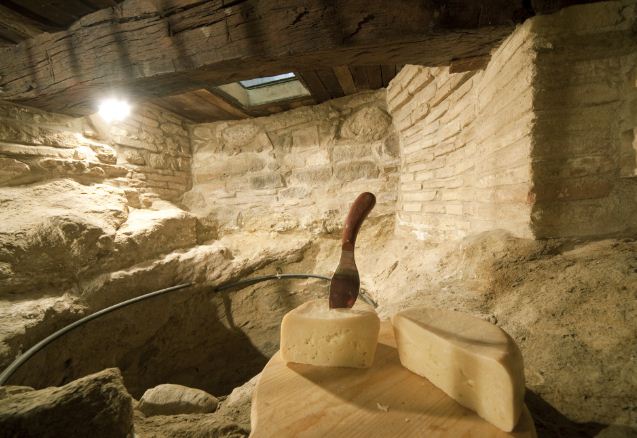