Octopus with potatoes, a great classic of the “slow cook”. Present in all the seas and oceans, it is also widespread in the Mediterranean Sea. In the Mediterranean it is fished mainly in two different periods of the year: from September to December and from May to July. Today we propose a tasty version with a crispy element.

Preparation:
Clean the octopus washed thoroughly under running cold water, remove the entrails contained in the bag, the eyes, the central tooth and rub to remove the sticky coating.
Place water in a rather high pot, the octopus, the bay leaf and the clove of garlic.
Bring to a boil, then reduce to a minimum the heat and cook for 50 minutes.
While cooking the octopus, boil potatoes of Bologna PDO in salted water for 20-30 minutes, after peeling them and put aside the skins.
When cooked, turn off the heat and let the octopus in its cooking water for 10 minutes, then drain and cut into pieces (if octopuses are small leave the tentacles whole).
If you need, remove the skin.
Putting the pieces of potato in a bowl and add extra virgin olive oil and salt, then add the basil leaves and garlic used to flavor the cooking water of the octopus.
Prepare the olive cream putting in a mixer pitted olives with a little extra virgin olive oil.
Fry the potato skins for a few minutes in hot seed-oil, then drain them, place them on paper towels and sprinkle with salt while still hot.
Cook the pieces of octopus for 2 minutes in a hot pan with a little of extra virgin olive oil.
Put a strip of olive cream, then lay pieces of boiled potatoes and pieces of octopus, finally decorate with fried potato skins.

Enjoy your meal and have fun! 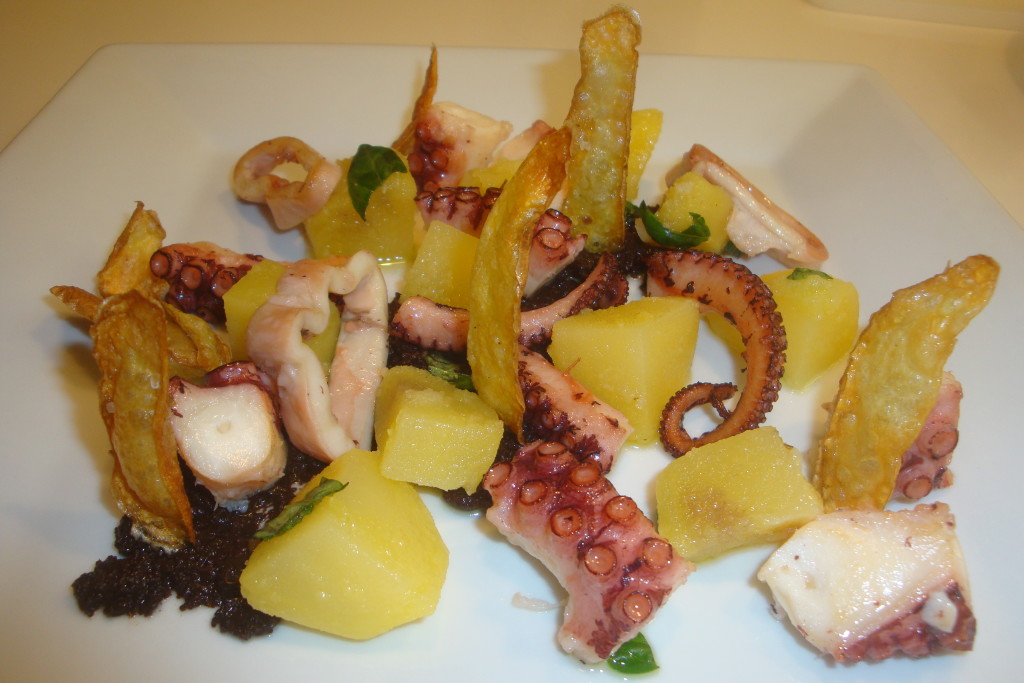