The Combai Brown joined the official list of typical Italian products with the certification PGI (protected geographical indication) that was issued on 3 December 2009.
Being a product of PGI certification requires that at least one phase of the production process should be carried out in the Veneto region.
The current production area of ​​Combai Brown PGI covers a large territory which coincides with the administrative boundaries of 11 of the 16 municipalities that are part of the Mountain Community of Treviso Alps in the Province of Treviso.
The chestnut groves are in this area of ​​the plant stable consortia that were favored in their expansion by humans both for the production of wood that the fruit often going to occupy areas in which once dominated the Oak.
The fruit, commonly called chestnuts, achenes are contained in number 2 or 3 in the hedgehog thorny maturity opens in 2 or 4 valve. The fruit is externally covered by a peel reddish-brown pericarp call while internally there is a second film velvety said episperm. The apex of the fruit has a characteristic tuft of hair (torch) while the base is found a scar of lighter color (ilo).
The chestnut, whose edible portion is represented by the white mass cotyledonary (pulp), has a high content of starch, sugar and fat, so a high nutritional value and has been an important source of food for the poorest people of the mountain.
In Italy a recent production of chestnuts has stabilized at about 60,000 tons per year and each production area has a distinctive product that has won their place on the fruit market.
The distinction between chestnut and brown, does not refer to specific botanical differences but it is important commercially.
The chestnut is small (more than 90 fruit per 1 kg) with elongated hemispherical shape, the color of the pericarp or outer peel is dark brown and uniform. The skin is thick and leathery while episperm (inner film) is deeply inserted in the seed. The peeling are rather difficult.
The brown is larger (less than 90 fruits per 1 kg), the oval shape enlarged, the lighter color with dark streaks in the sense median well marked. The outer skin is thin, and the film does not penetrate deep inside making it easier to peel. The flesh is sweet and tasty and not discarded cooking. 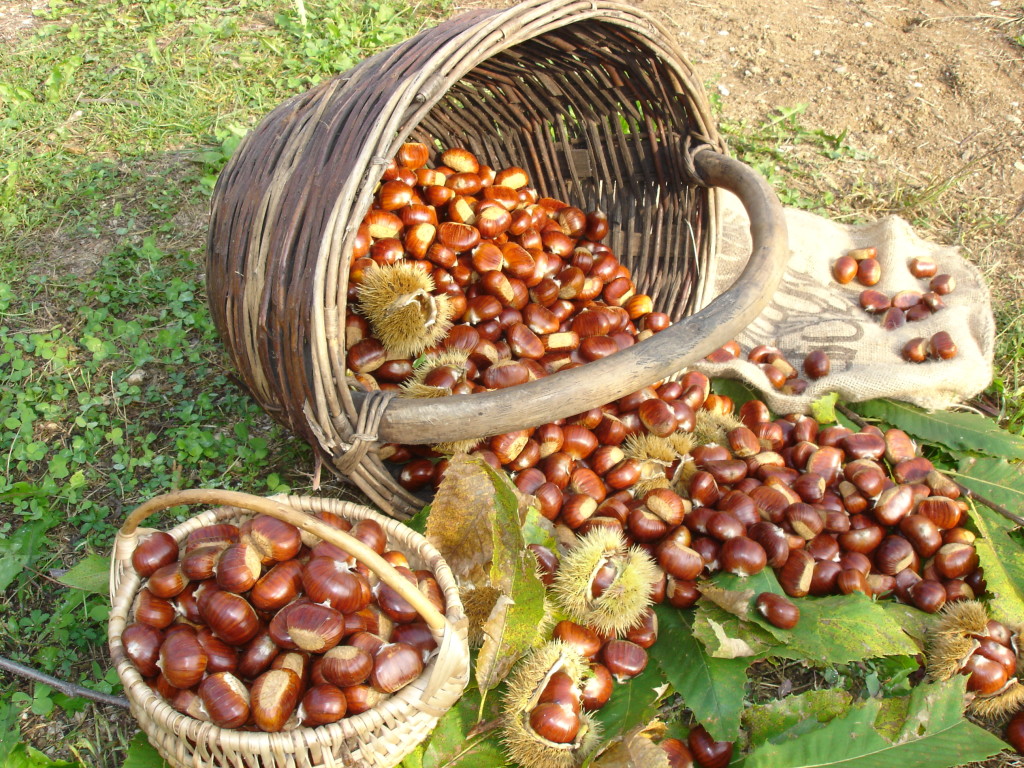