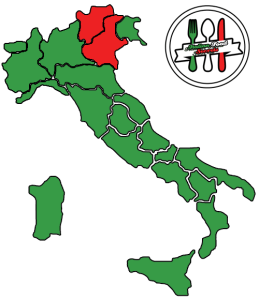 The Asiago becomes part of the official list of typical Italian products with the certification PDO (protected designation of origin) which was issued on 21 June 1996.
Being a product PDO certification requires that the entire production process must be carried out in the regions of Veneto and Trentino Alto Adige.
Typical product of the Veneto was produced since the year 1000 in the area of ​​Seven Towns, in the province of Vicenza. With the passage of time, in 1500 the sheep gave way to cattle, so the cow’s milk is replaced with that came the sheep and dairy technique that still characterizes the area of ​​production of this cheese.
The oldest, is certainly the Asiago I breed, whose shapes are cut only after months of seasoning. Featuring a cylindrical in shape bass has an average weight of 8-11 kg; the paste is compact with sparse small and medium-sized straw color. The taste is sweet in the most young, slightly spicy and characterized by grainy paste with the progress of aging.
In the ’20s began, instead producing a cheese Asiago shorter seasoning called Asiago since the forms just produced are subjected to a pressing under manual or hydraulic presses. This “new” has met the taste of the modern consumer who prefers tastes sweet and soft. It is characterized by the form rather large and rounded, the paste of white or light straw with its irregular holes and marked it easily recognizable even to inexperienced observers. The scents of milk are presented in this cheese in an even or nearly pure with hints of butter and cheese maker’s expertise shines through in the ability to make the dough soft but not sticky or greasy.