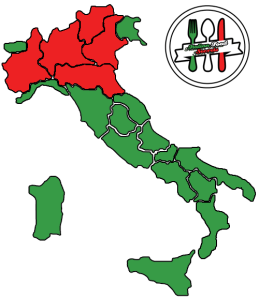 Grana Padano becomes part of the official list of typical Italian products with the certification PDO (protected designation of origin) which was issued on 12 June 1996.
Being a product PDO certification requires that the entire production process must be carried out in the regions of Piedmont, Lombardy, Emilia Romagna, Veneto and Trentino Alto Adige.
The birth of Grana Padano is a fascinating history, which dates from the year one thousand and the ingenuity of the Benedictine monks. The reclamation work accomplished by the Cistercian monks of the Abbey of Clairvaux favored the spread of livestock breeding, which soon became the father of a rich availability of milk, by far exceed the needs of the population. So it was that the monks began to point the “recipe” of Grana Padano, ingenious expedient for storage of surplus milk.
The result is a hard cheese that seasoning, keeps the nutrients in milk and acquires a unique taste, sweet and savory at the same time. Cheese which is spontaneously given the name of “grain” for the grainy paste that characterizes it.
The reputation of Grana Padano is consolidated over time and soon becomes fine cheese protagonist of the Renaissance banquets of princes and dukes, but also the main food of livelihood of the people of the countryside during the terrible famine.
A cheese with two souls: prominent ingredient of the elaborate recipes and cooking noble cornerstone of popular culinary tradition. With the passage of time the practice of turning milk into “Grana” spreads, becoming one of the pillars of the agricultural economy.
Its production area is Piedmont, Lombardy (except Mantua south of the Po), Emilia Romagna (excluding Parma, Reggio Emilia, Modena and Bologna to the left of the Rhine), the Veneto (except Belluno) and part of the Trentino .
Grana Padano PDO cheese is one of the best known and appreciated, both in Italy and worldwide. The grain produced in the province of Trento is marketed as “Grana Trentino”.
The Protected Designation of Origin was recognized June 12, 1996.
Grana Padano is grainy paste, cooked medium fat type. Is used milk from two milkings, the first left to rest a few hours to get a partially skimmed. The process involves the use of large boilers of copper and a long series of operations beginning with the addition of natural whey and end about a year and a half later, at the end of the maturation period. At the end of this last phase, comes the most awaited moment of all the long production process: the final mark (before a temporary mark is stamped “cloverleaf”.
The operation is preceded by a careful examination of each individual form. Only those who pass with flying colors are in fact eligible to receive the seal in focus (turbot) “Grana Padano”. The forms have large diameter 35-45 cm, height 20-25 and weighing from 24 to 40 kg. The crust, hard and smooth, is from 4 to 8 mm thick and has a dark yellow color. The internal paste is grainy and under the pressure of the knife breaks into flakes.