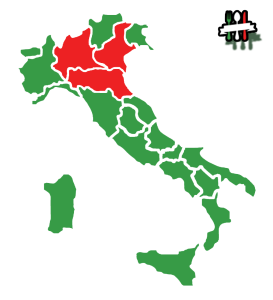 Zampone Modena joined the official list of typical Italian products with the certification PGI (protected geographical indication) that was released on March 19, 1999.
Being a product of PGI certification requires that at least one phase of the production process should be carried out in the regions: Emilia Romagna, Lombardy and Veneto.
The birth of the trotter is unanimously traced back to 1511. At that time the troops of Pope Julius II Della Rovere besiege Mirandola, near Modena. At the end of the siege the Mirandola were starving. That left only their pigs. Do not slaughter them was a sin: meant as gifts to the enemy, now close to enter the city.
The idea just came to one of the cooks of Pico della Mirandola, “Macelliamo animals, and we put the leaner meat in a casing formed by the skin of her legs. So do not rot, and we can keep. To cook it later. ” And so was born the trotter. The originality of form consecrated the fortune of this product in the following centuries.
Towards the end of ‘700 in the imaginary collective gastronomic Zampone Modena PGI replaced (along with the equally famous Cotechino Modena PGI) sausage yellow Modena already made famous in the Renaissance.
Zampone Modena PGI is a classic dish of the New Year’s Eve. This link between Trotter and the Christmas Holidays was born as a result of the rural tradition of sacrificing the pig from the day of Saint Lucia on 13 December. Among the products of the pig to be consumed in a short amount of time, or between those products that unlike salami and hams do not require a curing process, Zampone Modena PGI has always been considered a particularly prized. Was then reserved just for the holidays, accompanied by equally valuable lentils. The presence of Zampone Modena PGI also on the tables of nobles is confirmed by some traditional recipes that plan to accompany it with the eggnog, a cream that, given its ingredients – eggs, sugar, sweet wine – was bound to the tables of the wealthy.
Zampone Modena PGI is made from pork meat carefully selected together with rind, according to the dictates of the ancient recipe. The ground can be delicately flavored with pepper, nutmeg, cinnamon, cloves and wine. The resulting mixture is then stuffed into a natural casing, represented by the skin of the front leg of the pig, tied at the top end, as tradition dictates. The baked product is packaged in envelopes sealed and subjected to heat treatment at high temperatures for a time sufficient to ensure stability organoleptic. The raw product, however, is dried in hot air ovens. To be able to appreciate the organoleptic characteristics is necessary in this case it boil for about 2 hours in advance. So buy that taste typical, the pinkish-reddish and the firm texture of his trotter Modena PGI.