The Rice Vialone Nano Veronese joined the official list of typical Italian products with the certification PGI (protected geographical indication) that was released July 2, 1996.
Being a product of PGI certification requires that at least one phase of the production process should be carried out in the Veneto region.
The production area of ​​Rice Vialone Nano Veronese PGI includes the territories of several municipalities of the Province of Verona.
Spring waters and springs emerge abundant in the area of ​​the plain of Verona, is on their purity that this rice has its valuable qualities.
Early spring rice growers prepare the land that will receive the seeds of Rice Vialone Nano Veronese PGI. The seedbed should be absolutely flat. So the water, the source of life for the paddy, will flood the fields evenly. With fertilization, supported by organic matter, the earth receives the nutrients needed. With plowing and harrowing oxygenates. Regular furrows are ready to welcome the spring water. It will come in spurts in the wide expanses where the seeds will germinate under water, protected from the rigors of the spring night. But, after a few days, it will be subtracted from the paddy, the young rice plant can then be anchored to safer ground. By this time the floods and dry, carefully regulated by rice farmers, will accompany the vegetative stages of the crop responding to their needs according to weather conditions. The dry will also serve to destroy algae and harmful insects.
In late summer, the plant’s Rice Vialone Nano Veronese PGI has reached the maximum height and fertile tiller emit inflorescences that prelude to fertilization. Henceforth begins the maturation phase. By the end of August the ears appear swollen and golden. In good weather they reach the perfect ripening in late September.
Early autumn combine harvesters come in paddy and very quickly cut the stalks, cobs and collect the shell. The rough rice, paddy rice, after thorough drying, is transferred in the warehouses of the processing companies.
Paddy rice, before being stored in the processing companies, is dried in hot air plants. The Rice Vialone Nano Veronese PGI, in order to be packaged, must be below the limit of 14% humidity.
Grains, first released by the outer layers, undergo bleaching, result of a simple mechanical process of rubbing. Are then subjected to a selection with grills scanners capable of recognizing, separating, impurities and defective beans. At this point the white rice is ready to be packaged and offered to consumers. 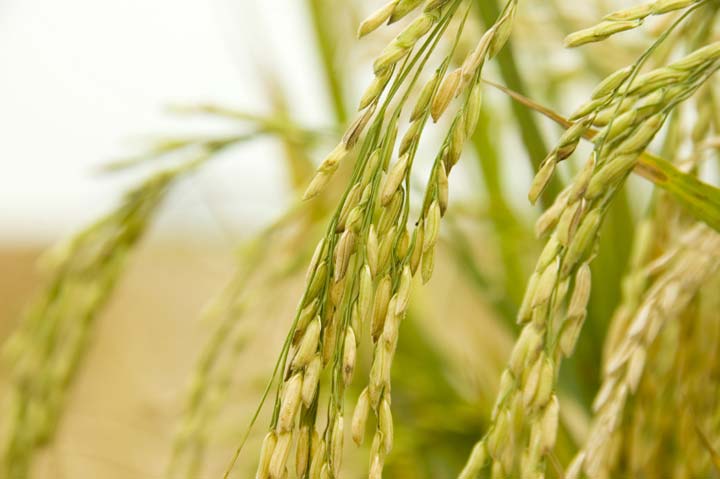