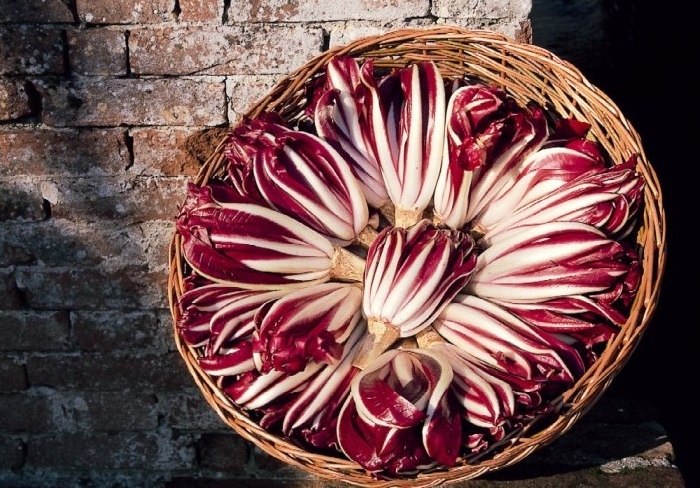 Radicchio Rosso of Treviso joined the official list of typical Italian products with the certification PGI (protected geographical indication) that was released July 2, 1996.
Being a product of PGI certification requires that at least one phase of the production process should be carried out in the Veneto region.
Growing Radicchio Rosso of Treviso PGI late is possible only in the campaigns of 24 municipalities, 17 in the province of Treviso, 5 in the province of Venice and two in that of Padova.
To be authentic Radicchio Rosso of Treviso PGI must come from the typical late located between the provinces of Treviso, Padova and Venice, and must be obtained according to the traditional technique of forcing and bleaching during which the bunches, after harvesting, which is normally done from the beginning of November, are placed in tanks filled with water resurgence. After about fifteen days, that is, once obtained the new shoots, we proceed with the phase of grooming, washing and packaging. Once ready, it presents the typical lanceolate, with regular and compact buds that tend to close the apex. The leaf blade presents a deep red color with a white midrib.
Its unique shape makes it regal in appearance, unique in flavor with the taste pleasantly bitter and crunchy. Perfect preparations raw and exceptional in its variations, from appetizers, main dishes, and main course, and finally as a side dish or base of delicious desserts.
Growing Radicchio Rosso of Treviso PGI ejaculation is possible only in the campaigns of several municipalities in the provinces of Treviso, Venice and Padova.
The production is located in the plains of central Kansas, characterized by warm summers and winters quite rigid.
Radicchio Rosso of Treviso PGI early has a size quite impressive and requires less manual work than the older brother. It tastes slightly bitter and leaves a rather crisp consistency, the color of the leaves is characterized by a very strong prime rib, white branching into many small penninervie in the deep red of the leaf blade that has developed considerably. Has a head massive, elongated, tightly closed, accompanied by modest portion of the root.
The harvest begins September 1 and unlike his late maturity is reached in the open field after the leaves are tied with a rubber band and kept shut, no light, for 15-20 days.