Chestnuts Monfenera become part of the official list of typical Italian products with the certification PGI (protected geographical indication) that was released on November 25, 2009.
Being a product of PGI certification requires that at least one phase of the production process should be carried out in the Veneto region.
Chestnuts Monfenera PGI must be grown, produced and packaged in the territory of several municipalities of the Province of Treviso.
The Protected Geographical Indication Brown Monfenera is reserved exclusively for Fresh fruit of the species Castanea sativa Mill., Local ecotype of Brown Monfenera.
The chestnut is an ideal habitat in the foothills of Grappa and Montello thanks to the climatic characteristics of the area.
From about 1980, the culture of chestnut is recovering throughout the foothills of Grappa and Montello, mainly due to the realization of numerous events, among which we should mention the Exhibition of Brown Monfenera PGI inaugurated in 1970. These events aim to promote the culture of the chestnut, for the improvement of environment and forests, and to exploit the fruits and numerous derivatives.
The very sweet flavor of the flesh, the uniform, compact structure of the fruit and its pasty consistency and powdery make unique Brown Monfenera PGI. Their properties, closely related to the climatic conditions in the area of ​​cultivation, derive from the average chemical composition of Brown, which shows a greater amount of carbohydrates, lipids and potassium, and a lesser presence of sodium. 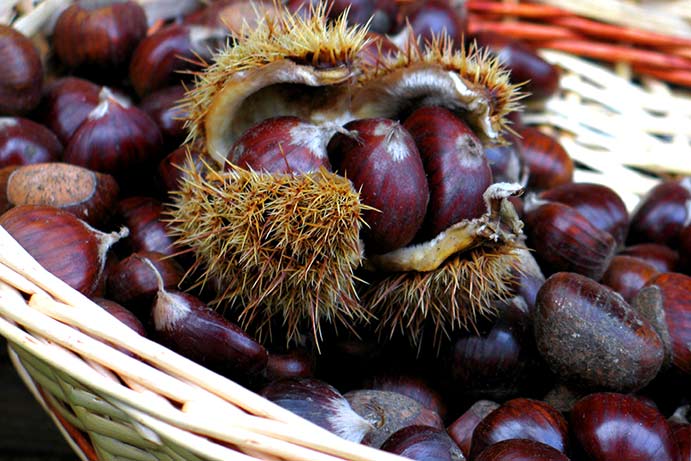