Asparagus Badoere becomes part of the official list of typical Italian products with the certification PGI (protected geographical indication) that was released October 15, 2010.
Being a product of PGI certification requires that at least one phase of the production process should be carried out in the Veneto region.
The alluvial plain formed by the contribution of secular placid rivers resurgence with a landscape very particular that is centered around the territory of Morgano and the surrounding municipalities of the provinces of Treviso, Venice and Padua. In this particular environment, soil and climate, rich in water and never icy land rich and soft, has developed the cultivation of Asparagus Badoere PGI.
Just the peculiar environmental conditions allow cultivation in this area without the use of specific interventions or irrigation fertilizing, then valuable example of environmental protection, respect for seasonal products, the exploitation of the region’s potential.
The cultivation of asparagus lasts several years and requires special implantation techniques that can be directed towards the sowing direct or indirect, in the case of Asparagus Badoere PGI is used the system with indirect sowing.
Once implemented the plantation must take great care that plants implement a vigorous vegetation, intervening, if necessary, with the block weeds, insects, and possible plant diseases.
In the third year begins the exploitation of ‘asparagiaia. If the ‘system is intended for the production of the white, the files are tucked in order to facilitate the whitening, and in doing so the field has a shape baulature. In the case of asparagus green land is left even. The first collection of the shoots may be made in the months of March and April.
Asparagus Badoere PGI has significant dietary properties. And ‘rich in vitamins and minerals, has proven diuretic and cleansing, thanks to the high content of water and fiber. As all vegetables has a low energy value and lends itself well to low calorie diets, as well as being highly digestible. Higher the content of asparagine or aspartic acid and folic acid important for pregnant women.
As regards the presence of nutrients for man (and more the stem is green, the greater is its concentration), it should be noted that the asparagus is very rich in vitamin C, E, of some vitamins of group B, of potassium, purine and uric acid. 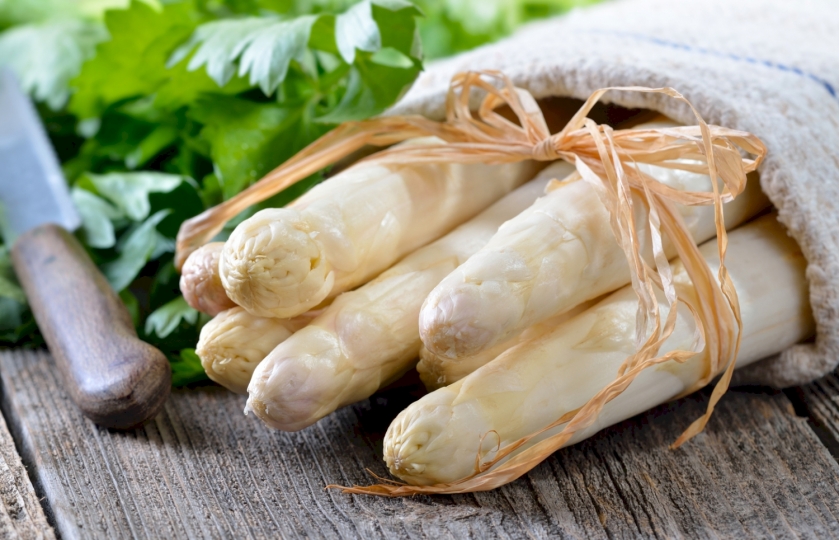